Observe if you will the following pictures. The first picture is my son's bathroom floor which is supposed to be picked up every morning. The second picture is my son's hamper which is supposed to collect the clothes he picks up. Gibson is currently trying to set a Guinness Book Record for clothes on his bathroom floor. I think we should place bets on how long he can keep this up? The over/under is a week and a half. :-) 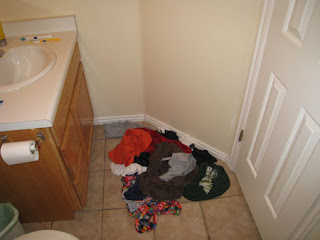 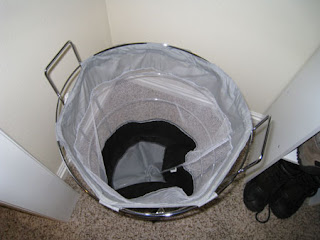 Brad, I sure can relate. My 17 year old son usuallyK "forgets" to bring the trash in every Wednesday evening. It's been his job for 2 years now. The trash bin and recycling bin are right on the street when he drives home, but of course they don't grab his attention.

It's nice to know that I am not alone. I think "Chores" will be the next tool card, so we will have to see how that goes.

I love your site and hope to buy the cards soon. I wonder what would happen if you put a hamper in the spot where he naturally drops the clothes?

I would do the same thing as India. If he's undressing in the bathroom, then I'd put the hamper in there. Even if it meant buying a new one. Or perhaps offer that as a possible brainstorming approach to the problem solving/conflict resolution meeting.

Hi India and Kim,
That is a great idea! This falls under the category of "Why didn't we think of that." :-)