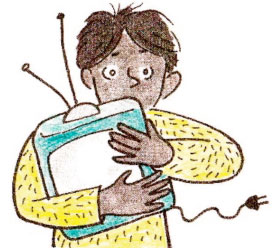 The fact is...we live in an age of technology. When most of us were growing up, we didn't have computers or cell phones. We did have televisions and I'm sure a lot of us spent our fair share of time watching Gilligan's Island, Star Trek, The Brady Bunch and (_________ fill in the blank of your favorite childhood television show). But we only had five channels. Eventually we got bored of watching TV and found something else to occupy our time.

Do you remember spending all day playing Monopoly? Creating a tiny city for your matchbox cars? Sleeping outside on the trampoline? The Slip 'N Slide? I could go on and on. The point is, we spent a lot less time in front of screens and we found other ways to entertain ourselves.

So why is it so hard to limit screen time today? I had this conversation with my children and my son said "That's because you didn't have all this cool stuff when you were a kid." And you know what? He's right! Video games finally appeared when I was a teenager, but I had to pay a quarter every time I played. It didn't take long to run out of money and then my friends and I left the video arcade and played basketball. But I'm sure if I had unlimited access I would have been like a gambling addict in Vegas. I probably would have never seen the light of day.

Just because our kids have unlimited access doesn't make it right. Or does it? I'm really not sure on this topic. Even though I would prefer that my kids spent less time with technology, they have well rounded lives. My kids both participate in sports at school. They both get straight A's. They have good friends. So why am I so worried about their screen time? Is it just "The Good Old Days" complex?

I've tried having "screen free" weeks in the past and those were the most miserable weeks of my life! I didn't get anything done, my kids were grumpy and expected me to entertain them. They fought with each other more and we all started getting on each other's nerves. I know you would like to hear a motivational success story, but it just didn't happen for me. Maybe that is because we are all screen addicts and those are the symptoms of withdrawal.

The truth is...I don't have the answer on this one. Maybe somebody else can provide some ideas for me or a success story. I'll be staring at my computer screen waiting to read all about it. :-)
Posted by Single Dad Brad at 3:28 PM

Brad,
What a wonderful, and honest, post. I have one daughter who seems to be able to handle more screen time than the other (who gets cranky, glassy eyed, and seriously unmotivated after too much tech time). Guess we all just have to use our parental intuition to decide what works and what doesn't. Love your writing : )

I am able to have week days screen free. My boys can access screen time (we have no tv but plenty of Internet devices) ONLY during the week-end IF AND ONLY IF the homework is done and verified.

Brad,
Great post! I totally had to think back... When did i play my old board games?? Well i love your writing and your blog.

Brad,
You sound like me growing up. My parents used to tell us stories about having nothing to do when they were kids and how we needed to turn off the tv or put away the board game and find something constructive to do. They thought we were spoiled. I raised a son and a daughter as a single Dad for 16 years and now I'm a new Dad over forty with children ages six, four and three. I'm more strict now about tv but my oldest daughter was allowed to watch tv and she has a degree in genetics. My oldest son is majoring in Russian. Where did I go right? Do I follow the same lead with the new babies?
Stan Reese, author
"Relax Dad, It's Just the Kitchen"
www.RelaxDad.com

Thanks for the words of encouragement. It's good to know that my kids might just make it after all. :-)

I have a feeling they will make it :) That's a funny conversation with your son, about you not having all that cool stuff. Does he think you want to limit it because you're jealous? That's probably the way my kids would have gone. They could spin circles around old Dad!

This is one we're struggling with too... No answers obviously (and my kids are younger too) but I have found something I want to try. Technology tickets given at the family meeting that can be used during the week, when they're out they're out. Part of me is excited about trying it and part of me is dreading how it might go lol.

MK, that's so funny that you mentioned technology tickets, because I just wrote about that in my blog...my family used them with great success, and I bet your family will too. So glad you're doing family meeetings too. I think this post of Brad's got so many responses because we're all trying to figure this stuff out : ) Good luck and have fun with it...
Kendra

Kendra - :-) I hope so! My daughter is really excited about them so far, but I'm not sure she gets it. Today was our very first family meeting too. I've been wanting to start them for awhile, but until I got the Positive Discipline A-Z book I hadn't put too much thought into just how important it was or the logistics of doing it. I'm glad we've started now though!

I hear "screen-free week" is coming up next week. If it were mandatory and I was stuck back with my girls at their adolescent stage, I would have hidden in the basement until it was over.

Perhaps there would be more of the house left over than there was the time they set fire to the living room.