Sibling Rivalry from the Perspective of a Younger Child 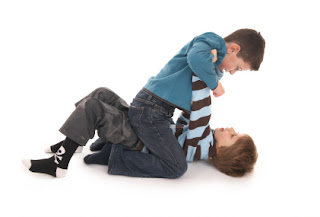 "Putting Kids in the Same Boat" is the most difficult Positive Discipline principle for me to grasp. Mainly because I had and evil older brother who constantly persecuted me while we were growing up. As a result, I have the perspective of the younger sibling with a victim mentality. I'm sure my older brother had issues he was dealing with such as; being dethroned by a younger brother, feeling less belonging and significance, etc. I don't know if picking on me and establishing his dominance over me ever made him feel better, I just know that if his goal was for me to live in fear...it worked.

So now that I am a parent, I have very little sympathy for the older sibling who bullies the younger sibling. Intellectually I understand the concept of "A Misbehaving Child is a Discouraged Child". I just don't seem to be able to put that theory into practical application.

Below are the suggestions from the Positive Discipline Tool Card "Put Kids in the Same Boat".

Instead of taking sides when children fight, treat them the same.

1) Give the same choice: “Kids would you like to go to the peace table or the wheel of choice?”
2) Show Faith: “Let me know when you have identified the problem and have ideas for solutions.
3) Leave. Fighting will diminish significantly when you stop taking sides-so long as you are having regular family meetings to teach problem-solving skills.

I have never been comfortable staying out of my kid's fights. My mantra has always been "we don't hit in this house". I also don't like abusive language and I won't stand for that either. My son is certain that these rules have been put into place so his younger sister can get away with anything. I know he feels that I favor his younger sister, which is probably true because I can relate with the younger sibling and she is a girl. I am trying to teach my son to treat women with respect.

I can't tell you what would happen if you stay out of your children's fights, because I have never done that. But I have used the method of "treat them both the same". That has worked best for me. If the kids are fighting I will tell them to go to their separate rooms until they can get along. Or if they are fighting over the television, I will turn off the television until they can get along. Regardless of the reason for their fight, I do my best to treat them the same.

The only time I stray from that formula is when I am right there in the same room with them and I witness the entire event. For example, when my son walks by my daughter while she is quietly drawing a picture and just smacks her in the head completely unprovoked. I don't have any patience for that kind of behavior.

I would love to hear how other parents are dealing with sibling rivalry and fighting.

I am considering a career as a professional referee...a sibling rivalry referee that is.

With a houseful of boys, it is a rare moment that two of them aren't rolling around wrestling on the floor or throwing a shoe at each other (some of which have deflected on to me :P)

In these moments I sneak back into my room to watch the nature channel. "Why?", you ask. Well, when I see two little lion cubs wrestling I am reminded that it is innate, boys were meant to conquer things-which usually means whatever brother happens to be walking past at the time.

So as long as the conquering isn't harmful I let it go, but when they cross the line, I have one solution...I make them work! Hard, manual work :)

Someday when they have huge muscles, I'm pretty sure they'll thank me.

I love it! Thanks for sharing PixieGirl.