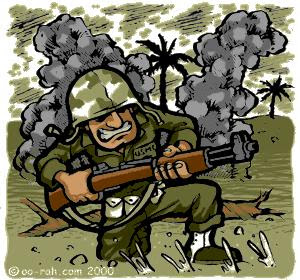 Becoming a full-time single father was quite a shock at first! Like most dads, I was much better at being a relief pitcher. I would come home from work and play with the kids and read them a book before bed. I also enjoyed coaching little league teams and helping with the other extra curricular activities. But like most of my current golf buddies and poker buddies...I would start to crumble if left home with the kids for more than an hour.

So when I first started parenting on my own, I was completely overwhelmed. T.V. became a thing of the past! My golf game began to suffer and folding laundry became my new hobby! And then about a month into this new adventure I went through a month of Boot Camp!!!

The flu hit our household with a vengeance! But of course my kids didn't cooperate and get the bug at the same time. Instead they each got the flu about one week apart. So for three solid weeks I was nursing kids back to health, changing sheets and cleaning up puke! And then just when I thought the nightmare was over...I got the flu!!! Suddenly I had a new perspective on single parenting. It actually isn't quite as hard as I perceived it to be. Because when you try and handle that job with the flu, you realize that it could be much, much more difficult. So from that time forward I tried to have more of an attitude of gratitude. And somewhere along the line I also realized that I can't do it all. One man can only accomplish so much in a day and I learned to let things go. I still have the occasional meltdown...but they have become few and far between.
Posted by Single Dad Brad at 8:37 PM

Holy crap, have I ever been there! It's not easy doing it alone. Ever. A juggling act that no one can fully appreciate unless they are doing it too.

I feel your pain. And know your joys.