I learned this past week that it is important to be flexible about special time with my kids. I had to be flexible on Friday which was the day we had planned our special time. The kids had the day off from school, so I was going to play tennis with Gibson and practice softball with Emma. Then we woke up Friday and opened the front door to this... 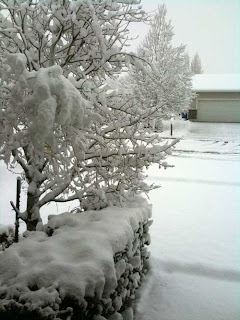 Not exactly tennis and softball weather. Which actually turned out to be a good thing, because I was having computer problems and I was able to spend the day getting those issues resolved.
On Saturday the snow had melted enough for Gibson and I to play tennis. That was when I learned to be flexible again. You see...when you involve your children in this process of using the Positive Discipline Tool Cards, they will actually understand the process better than you. When Gibson and I arrived at the tennis courts, we rallied for 10 or 15 minutes. Then I said "Okay...let's play. You can serve." Little did I know that my perception of tennis and Gibson's perception of tennis were completely different. It took me about 30 minutes to figure out Gibson's version of tennis and he reminded me several times "Dad...this is my special time. I want to play fun tennis."
For those of you unfamiliar with "Fun Tennis", let me enlighten you. First of all you are not allowed to call out the score "Love - 15, Love - 30, etc." I learned this early on when Gibson said "Dad...be quiet!" I responded "What?" Gibson said "Stop talking!" I said "I'm just calling out the score." Gibson said "Yeah...stop doing that. I want to play Fun Tennis." Okay...lesson learned. In "Fun Tennis", you do not under any circumstances call out the score.
Then after Gibson served twice and missed, I said "Double Fault" move to the other side. To which Gibson responded "Dad...stop doing that!" I said "Stop doing what?" Gibson said "Stop telling me what to do, this is my special time!" Okay...lesson #2 learned. In "Fun Tennis" you always serve from the right side.
Then it was my turn to serve. Gibson was standing in the middle of the court, so I said "Gibson, you had better move over a little." Gibson didn't move. So I served to the right service court and the ball landed in and then bounced to the fence. Gibson said "Dad...you just did that to prove a point." I said "No I didn't, that is how you play tennis." Gibson said "Dad...I just want to play fun tennis." Lesson #3 learned. In "Fun Tennis", you always serve to the middle of the court.
Finally after several missteps, I learned all the rules to "Fun Tennis" and Gibson and I started having fun. After tennis, I took him to get some food and our special time ended up being a success.
Since the snow hadn't quite melted off the grass, Emma and I decided to go to dinner together at Olive Garden. It was a Saturday night and by the time we got there it was an hour wait for a table. Emma said "That's okay, this is our special time. I don't mind waiting." That made my heart smile and so we waited for a table and had a wonderful time together.
Just a few final points about special time. As a busy single dad, I found myself looking at my scheduled special time with my kids as just another item to check off my already overwhelming schedule. I realized that I needed to change my attitude about my special time with the kids. Nobody wants to be an item that is just checked off a schedule. It might even help to show our kids that we are excited about our special time together. We could say something like "I can't wait for our special time on Saturday. That is going to be so much fun!" Then our kids will realize that they are much more important than all the other events we have scheduled that week.
Posted by Single Dad Brad at 8:48 AM

We have been implementing special time with my 4 year old for a while. My husband and I trade off each night with him. We play games or legos or what ever he wants. I used to have a hard time playing with legos and now I enjoy it and we love to create new trucks and buildings together and our lives are so much more peacful and enjoyable for it.

I walked into the store on Saturday night to buy bread and walked out smiling and inspired by a beautiful little girl who was BEAMING from spending the night with her daddy! I could tell by the sparkle in her eye that there was nowhere else she would rather be (even if it happened to be in the health-food isle at Smiths).

Some of the richest little girls in the world will never know how it feels to be truly happy, but your effort to spend special time with Emma had happiness written all over her darling face:)

My husband has an improv background and all of our children have taken improv classes (I'm the only one that hasn't yet!). Anyway, the thing I love about improv is that you always accept the other person's ideas and you just run with it. No idea or suggestion is wrong. What a great life skill to have!

Your story reminded me of how much fun it can be to throw out the rules every once in a while.

Very sweet that Emma didn't mind waiting for an hour for a table as long as she was spending her time with you :)