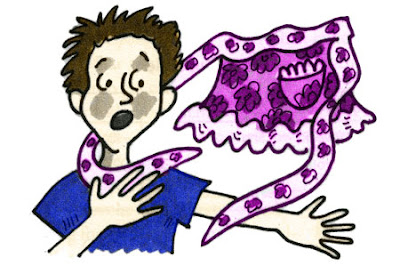 Letting go does not mean abandoning your child. It means allowing your child to learn responsibility and to feel capable.

1) Take small steps in letting go.
2) Take time for training and then step back.
3) Have faith in your child to learn from his or her mistakes.
4) Get a life so your identity doesn’t depend on managing your child’s life.


I need to pay special attention to the first sentence in this tool card. "Letting go does not mean abandoning." I've never had a problem letting go with my children. For the most part, that has been a very successful strategy. But occasionally (when my kids are being particularly annoying) my letting go looks more like abandoning.

Yesterday was a perfect example. We were invited to go ice skating and have dinner with friends. My daughter and I were excited by the invitation. Unfortunately my teenage son was less than excited. He was grumbling and complaining. "Why do we have to go?" "Will we be gone a long time?" "I REALLY don't want to go!"

We were in the car pulling out of the driveway and my son was still complaining and throwing his backpack down on the floor and just generally being belligerent and trying to make sure everyone would be as miserable as he was. We hadn't even left our street and I turned the car around, drove back to our house, and told my son to have a nice day. I let go (abandoned) him for the afternoon so my daughter and I could have an enjoyable time. And we did!

I don't think that is the spirit of this tool card. It has more to do with letting our children have more responsibility and become capable, contributing members of society. I don't think my actions achieved this goal.

My daughter was able to put things into perspective as we drove away. She said "Dad...that's just the way teenagers are. My teacher said that her daughter was disrespectful and grumpy until she turned 18 and now she is a joy to be around. So don't take it personally if I act that same way when I am a teenager. I might say that I hate you, but I won't really mean it. That's just what teenagers do."
Posted by Single Dad Brad at 7:25 AM