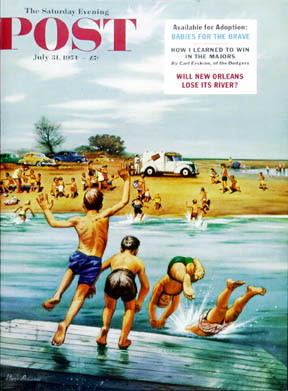 One of the joys of parenting is watching your children enjoy the simple pleasures of life. Like the Ice Cream Man! Today is the 4th of July and we were preparing for the usual festivities of BBQ's and Fireworks when I heard the familiar sound of the Ice Cream Man. So a called my two youngest children, gave them each a dollar and told them to go outside and listen. Their eyes got as big as saucers and they said in unison "The Ice Cream Man?" "The Ice Cream Man!!!" and went darting out the front door!
It was amusing to watch them perform a Keystone Cops routine while clamoring for their bikes and bumping into each other. Which normally would have prompted an argument and some name calling, but there were more important things at hand. The Ice Cream Man was in the vicinity of our neighborhood and they could not let him get away. So off they road down our quiet little street chasing after the carols of the Ice Cream Man! A few minutes later they were back with ice cream in hand and smiles on their faces!

Email ThisBlogThis!Share to TwitterShare to FacebookShare to Pinterest
Labels: Kids