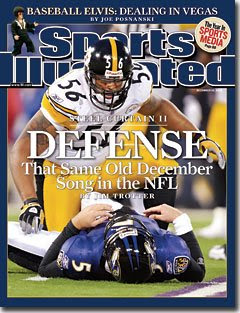 It was a sad day for Sports Fans when Rick Reilly, after nearly 23 years, decided to move to ESPN and stop writing his "Life of Reilly" column on the back page of Sports Illustrated. Sports Illustrated has been in my home since I was a child and I have always looked forward to reading Reilly's amusing and sometimes touching perspective on sports.

When Reilly left, Sports Illustrated decided not to replace him with one columnist, but rather have three columnists take turns writing the article. In my opinion one of these writers is head and shoulders above the others. His name is Chris Ballard and he as written some gems since he started. You can check out his archives at this link Chris Ballard Archives.

Here is a sample from the back page of this week's edition of Sports Illustrated:

LEARNING FROM THE PROS

Envy me, for I have drunk deep from the chalice of athletic wisdom and I am a smarter man for it. For the better part of four days I have done nothing but read pro athletes' blogs, Facebook pages and Twitter feeds. (Don't know what a Twitter feed is? Ask the nearest nine-year-old.)

I know what you're thinking. Athletes' blogs? Aren't those filled with base self-promotion and mind-melting mundanity?

Not so long ago I thought the same thing, naively assuming today's jocks could offer little compared to their predecessors. After all, while playing for the New York Knicks in the 70s, Bill Bradley wrote an insightful book called Life on the Run that included sentences like, "My attention drifts out through the bus window to Cleveland, one of America's northern industrial cities where furnaces of progress leave everything ashen, like the gray of a December morning."

Why couldn't an athlete today write something like that? Well, besides the fact that they're rarely on buses?

So I plunged into the prose of the pros and stand before you a changed man. I have learned the secrets of success from Tiger Woods and Donovan McNabb, I have LOL-ed with Baron Davis and "got back 2 it" with Carmelo Anthony. When Marshawn Lynch asks whether "U feel me?" I can now say that I do, Marshawn, I do feel U. I have watched Ron Artest eating sushi and Diana Taurasi grooving to Haddaway's "What is Love?" And, with Shaq as my guide, I have pondered the mysteries of the universe, such as "Did mrs Clinton really take da job"

Yes, Shaq, she did. (Though when it comes to another question you recently posed - "Whatthe hell is wrong wit da suns" - that, I fear, is a deeper riddle.)

Oh, the places I have gone and the things I learned. I found solutions to the financial crisis ("Heck, come on people. Spend! Get this economy going" writes US Olympic swimmer Ian Crocker), learned the rigors of NBA training ("I play Halo some days for 14 hours," confides Wizards guard Gilbert Arenas) and had my misconceptions about NFL players corrected ("I think it's a reach to think of more than three or four on a team that really would carry around a gun," writes Redskins tight end Chris Cooley.) And I think I speak for all of us when I say, isn't that a relief!.

Some players marvel at their own skill ("The crazy thing is my jumpshot is really coming along [and] that could be scary," writes Nuggets forward Carmelo Anthony) while others focus on that of their progeny. ("We had a big boy moment!" reports softball player Jennie Finch, "Ace 2 days ago pooed in the potty!!!") I can only imagine what has to happen for Ms. Finch employs four exclamation points.

I encountered a wealth of trenchant discourse on current cinema, from Shaq's insightful take on The Punisher ("great bloody movie, aggggggh....aggggggh (growl) (snarl) spit") to Celtics guard Rajon Rondo's Denbyesque deconstruction of One Missed Call ("Hands down it was the wackest, most horrible, sorry, miserable, lousy, inappropriate, disappointing, pathetic, deplorable, atrocious, awful movie I've ever seen in my life.")

Regrets? On his blog, former 49ers linebacker/maniac Bill Romanowski admits, "I wish I had found meditation while I was playing football," and I'm guessing there are a couple hundred NFL wide receivers who wish he had too. While over on his blog, Arenas grapples with the tough dilemmas an athlete faces ("A fan sent a pair of his grandmother's underwear over to me when I was on the bench during a game," Arenas writes, adding, "it was a little awkward.")

Everywhere I clicked, I gleaned useful advice, from the obvious ("There is no better way to celebrate a big win," writes Cooley "then getting grabbed and punched in the balls by a bunch of offensive lineman on the bus") to the practical. When attempting to ingest nine pounds of fried asparagus in 10 minutes, one should "eat 2 spears at a time" advises competitive eater Pat Bertoletti, and use "wylers pink lemonade/raspberry to get it down."

There were tips for other bloggers ("please don't use Wikipedia as a reference," pleads Curt Schilling), tales of promotional snafus ("I've seen bobbleheads of me where I was a white player," laments the decidedly non-Caucasian Curtis Granderson of the Detroit Tigers) and helpful hints on eating pancakes ("Start by cutting your first bite out of the center," writes Crocker, as it's "the warmest, softest, most flavorful spot.")

I encountered no MDs, yet learned a remarkable amount about medicine. On her blog, Mercury guard Taurasi describes what it was like to have an infected hair follicle removed from her back ("incredibly painful...I could feel the creature in every nook and cranny") while promising "the video will follow" with "maybe a soundtrack." Arenas -- perhaps the most prolific pro blogger out there - reports on the downside of painkillers, namely that after taking them, "I couldn't use the restroom for like five days." Alas, there is no video to follow.

No one taught me as much, however, as Hornets center Tyson Chandler. For example, never play a "sex song by R. Kelly" while one's wife is in labor ("she almost kicked me out of the delivery room"). Likewise, it's foolhardy to loan your bike to random kids in Compton ("I would see the dude riding off to the sunset like, "Hey, you wanna come back?). And if you buy tickets to Sesame Street Live, be forewarned that it is not all about but rather only featuring Elmo ( "It's hilarious to me that Elmo is like Beyonce and Destiny's Child.")

Finally, near the end of my cyber wanderings I came upon the blog of tennis star Rafael Nadal and discovered a novel sentiment: insecurity. Nadal, it seems, just wants to say he's sorry - for the scarcity of his posts, their tardiness and, most of all, for their irrelevance. "Why am I saying this? Who cares, right?" he writes in one. In another, he hopes, "that I am not too boring because I would hate that," then apologizes again, professing that, "I don't think this will be a very deep blog if you know what I mean."

Email ThisBlogThis!Share to TwitterShare to FacebookShare to Pinterest
Labels: StrAinge