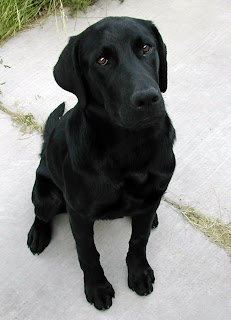 About a year ago a pure bred black lab wandered up to our house. He was a very friendly dog and we decided to take him in and see if we could find his owner. My 8 year old daughter was convinced that she had manifested this dog into our lives by wishing for him. Our last dog, a dalmation who had been in our family for over 10 years, had died about 6 months earlier. So around Christmas time she started wishing for a new dog. Who am I to doubt her...maybe her wish did come true.

We posted signs and notified the shelters, but nobody claimed the dog and so "Buddy" became part of our family. As a young black lab he has created his share of mischief. There have been times that I've wondered why I would ever take in a stray dog with all the other responsibilities on my plate. But my kids help out a lot by feeding him and playing with him. And except for the occasional chewed up sprinkler head or dug up landscaping, he has been a very good dog.

Recently my daughter came into my office and handed me a piece of paper. She informed me that it was a list of all the things she loves about Buddy. The following is her list which she had numbered from 1-23!

5. He keeps everyone company.

14. He has the most cutest collar ever.

Email ThisBlogThis!Share to TwitterShare to FacebookShare to Pinterest
Labels: Emma